The Sew Weekly Challenge is Broadway / Musicals this week.  Having never seen a musical (and not being the biggest fan of theatre in the world), I thought I'd skip it.  Then I was vacuuming the other day and started singing "Good Morning Starshine", and it clicked how much I love the musical Hair.  I know it's cheesy, but I've seen it so many times.....  I have both the original Broadway and the movie soundtrack.  I can sing all the words to "Frank Mills".  I guess that makes me a fan of one musical at least.

And I had just the pattern to use:
I got this groovy pattern at the NYC meet-up pattern swap.  I'm going to guess it came from Lisette because she's a big '70s fan, but please let me know if it came from you instead because I absolutely love it.  No really, I love it! 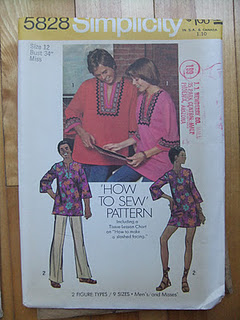 I had to scout around in my stash for a while for a piece of fabric big enough to accommodate those bell sleeves.  I bought this length of fabric this summer at Value Village for $4.99.  It looks like half or a third of a sarong panel.  I've seen them for sale in S.E. Asia for only a few bucks for the whole length, but lacking the funds to fly to Asia and buy fabric again, I think I'll accept that I got totally ripped off by Value Village and leave it at that. 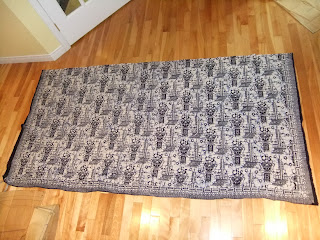 Yeah, it's another blue batik fabric.  We all know about my obsession. 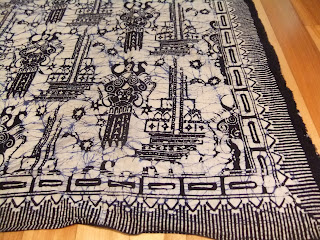 I've never used a "How to Sew Pattern" before, but imagine that you've never cut or sewn, and this would be the pattern to use.  There is a simple straightforward illustration for every step, and there is even an extra tissue sheet included that explains exactly how to sew the slashed front.  This is honestly the first thing I've ever sewn that I didn't have to rip even once.  Score. 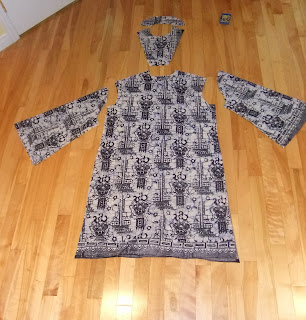 Here's an exploded view of the cut pieces.  There was just barely enough fabric to get all the pattern pieces because of the directionality of the print (and because there was a spot of something crusty I'm going to call glue that I had to cut around).  The sleeves don't match, but what'r ya gonna do? 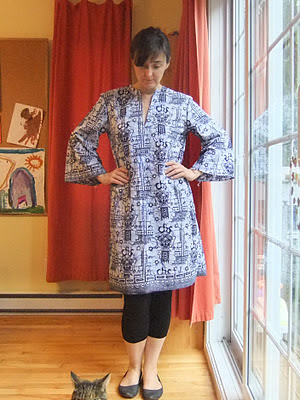 (I call this the "Get Out of My Shot, Lulu" pose.  It's been featured here before.  I had planned to take some photos outside in the pile of vivid yellow walnut leaves in my backyard, but it's raining icicles today.)
I added a few inches of length so I could wear it as a minidress in the summer or with tights now that the cold rains of autumn have arrived. 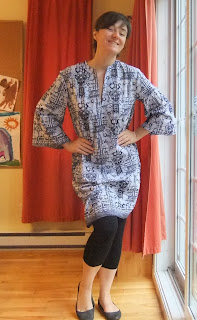 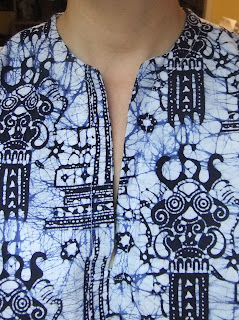 Close-up of the slashed front.  It's actually not lopsided; it just looks that way because I was taking a photo with one hand.
I am in love with this tunic and I know I'll be wearing it out.  I am going to wear this tomorrow.  And probably next week and the next and the next until everyone is sick of it.  Except me!
Posted by Another Sewing Scientist at 16:31