I've been travelling.  A lot.  First was a road trip from Montreal to the Eastern Shore of Nova Scotia where I grew up and my parents now live again.  Two days and 1200+ km with two little kids.  We all survived, although I would only recommend this maneuver to Advanced Parents.  There were lots of snacks, stops, clean-up supplies and Pintrest-inspired tricks to keep the sanity. 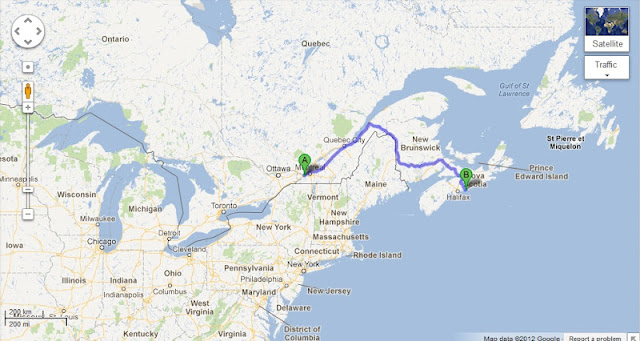 Then we drove another 5 hours to our extended family's bungalow (cottage, to those of you not fluent in Cape Breton-ese).  We swam in Margaree Harbour, ate ice cream every day and set out lots of mouse traps. 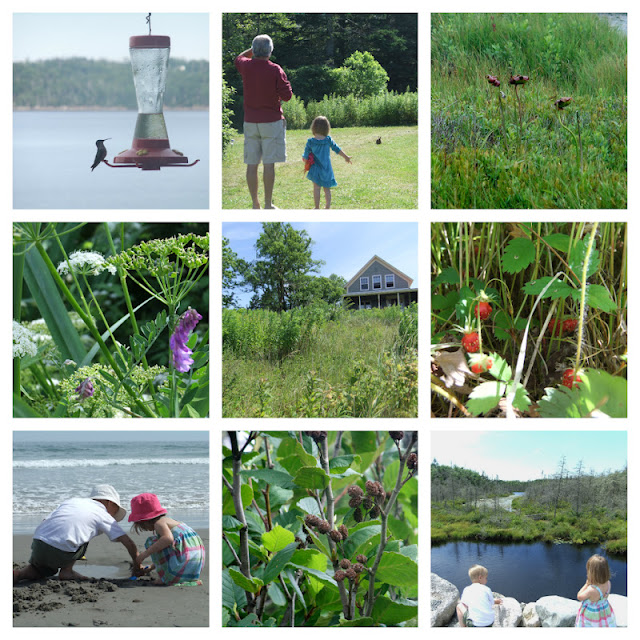 After two solid weeks of fun and sun (practically unheard of in Nova Scotia (the uninterrupted sun, not the fun)), we drove back to Montreal just in time for me to unpack, repack and hop on a plane to University of South Florida in Tampa for a work trip.

This collaboration was born about a year ago, when I spoke at a colloquium about our drug discovery research.  I was selfishly hoping that the trip would have happened in January or February, when we are 3m deep in snow, but somehow it got delayed until the last week of July, when Montreal is also hot and steamy.  I know, I know....first world problems.  It's still a free work trip with all that entails:  meeting new people, training new students, exploring a new city, staying in a hotel with a pool and a room all to myself.  (you never appreciate the total freedom involved in DOING WHATEVER YOU WANT FROM 5PM-9AM until you have kids.  Even the flights were like a mini-vacation for me because I got to read my book uninterrupted.  But I digress.)

And believe it or not, through all this travel, I still managed to get a bit of sewing done.  I worked on a Mfengu inspired linen skirt while on the long road trip: 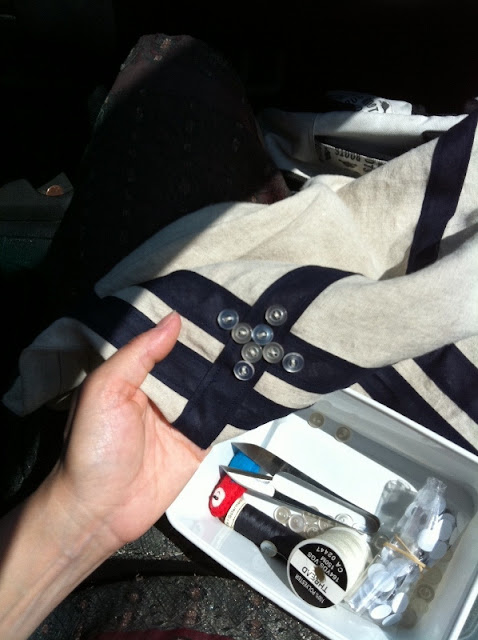 Sewing the buttons in the car brought on a bit of motion sickness though, so I had to do it in brief patches.  Then we stopped at an Irving Big Stop (Eastern Canadians will know what I'm talking about) for an awesome photo session: 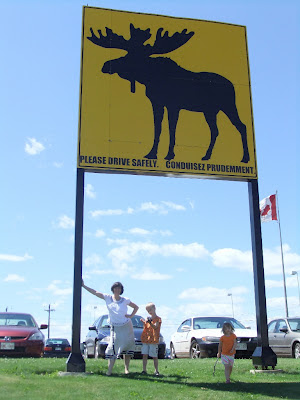 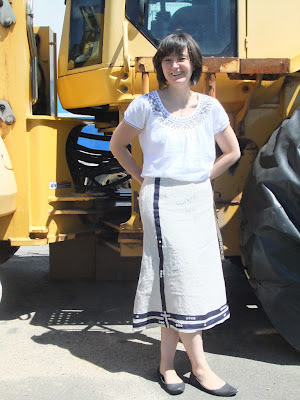 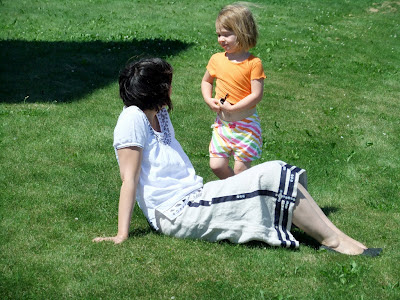 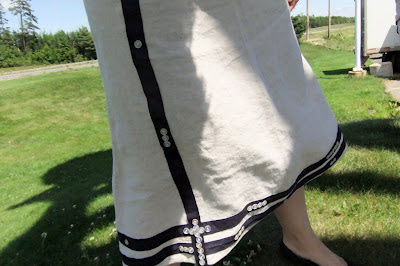 I also found time to sew a super simple pull-over dress for my daughter that ended up being both too wide and too short (I guess she's tall and skinny for her age!) but still cute nonetheless.  Maybe she'll wear it with leggings in the winter?  I have to remember to add 6 inches to her dresses from now on.  These kids are going to be towering over me before I know it. 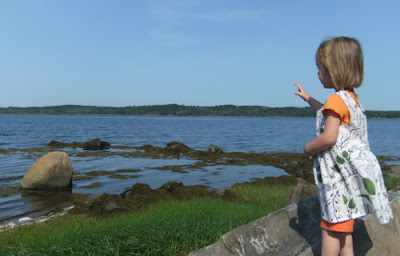 And to top it all off, I've also been invited to Promaballoona in August.  I gave away my two homemade prom dresses many moon ago (one made by my mother and the other by an aunt) but I'm sure I've got something hanging in my closet that is appropriate for the serious, formal occasion in question.

Damn, I've got a room overlooking the pool and a big, loud group of teenagers just checked in and are whooping it up outside.  Don't they know I go on business trips to avoid having to listen to kids? Sheesh.
Posted by Another Sewing Scientist at 21:45 3 comments:

Remember this panelled shwe shwe I bought in Cape Town in May? 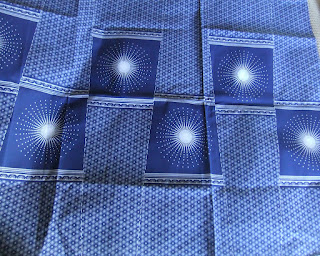 Here's how it looks all sewn together.  Insta-skirt.  (Well, insta if you don't include fitting, adding a waistband, zipper, hooks and eyes and hemming.  Kind insta.) 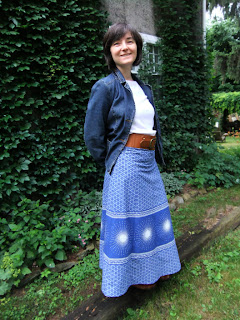 I like this vaguely cowgirl look I have going here.  Full disclosure:  I used that belt because the waist needs to be taken in by the tiniest bit.  The panels are perfect trapezoids, and we all know that bodies are not trapezoidal. 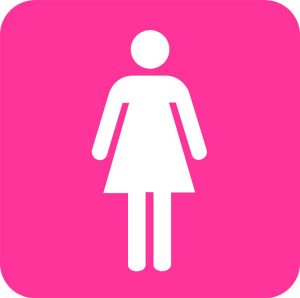 
It sits on the hips and then gaps about 2cm on the waist, which is not enough to really notice, but it's enough for *me to notice* which is what really counts.  It's that tiny difference between being a well loved wardrobe staple and a not-quite-right-and-don't-wear-it-very-often garment.  (There is probably some tremendous compound word to express that in German, but since I only took intro German and have forgotten 99% of it, I'll leave that to you, dear readers, to figure out.)

During our last heat wave, I made this super simple tube dress with loops sewn into the top, so that the straps can be tied in lots of different ways.  Great except for two things:  I don't own a strapless bra, and the bottom hem is just slightly too narrow so I can't run.  And I run a lot.  There is an emergency in the family about every 30 minutes that requires me to quickly run to the rescue.  Both of those problems are easily fixed, but who has the time right now? 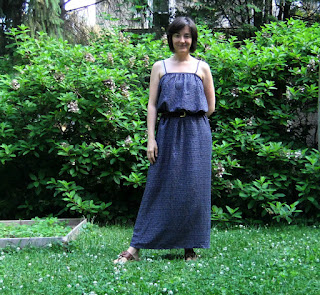 I started using picmonkey for photo editing, and I like it better than anything else I've tried.  No more stitching together photos in powerpoint. 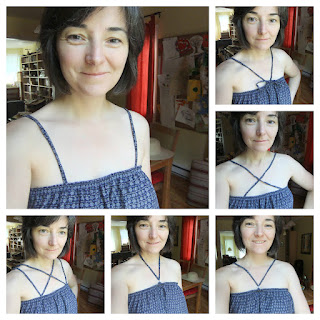 My three-year-old helped take the photos that week, and to tell the truth, they weren't half bad.  Here she is imitating some kind of "Who Me?  But I'm so adorable" pose. 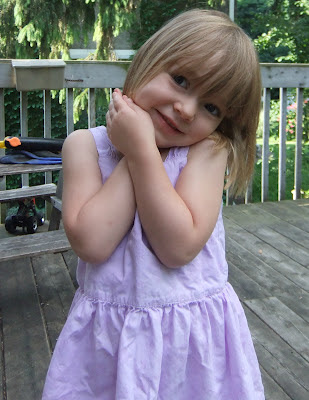 Then I remembered that the weekly theme for July 4th over at The Sew Weekly is Red, White and Blue.  Well, I'm pretty much white and blued out for now.  Maybe I'll try to finish up some UFO lying around here while I'm off work tomorrow, even though I should be preparing the family for our long road trip.


Nah, sewing is more fun than packing and housecleaning.
Posted by Another Sewing Scientist at 22:01 6 comments: