Clio from fivemuses nominated me for the blog hop, and it was probably a good idea:  I just don't blog that much anymore, for reasons that I'll explain a bit below.  But perhaps this will get me back into the swing of things.

I started off writing only for myself, as a way to keep track of what I was thinking, what I was doing, and what I wanted to learn.  I didn't link to my blog anywhere else because I thought of it as a private diary of sorts.  Then I realized that there was so much interaction going on within the sewing community and I wanted to be part of it too.

I think I started sharing my blog when I decided to enter the Burdastyle "Party Through the Decades" contest in 2010….*goes digging back in time*…..ah yes, here it is: 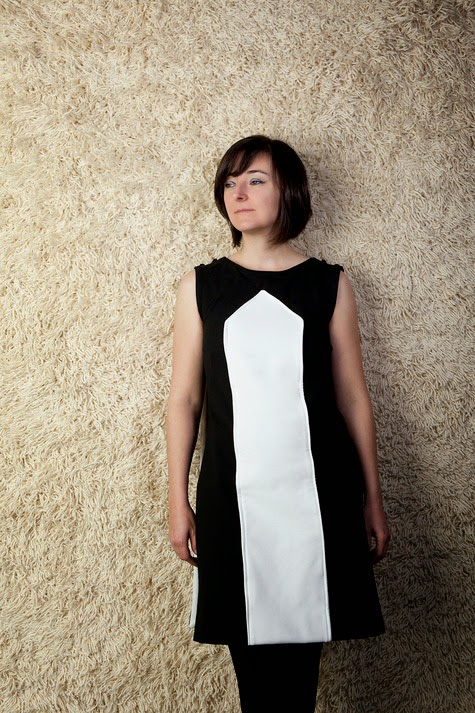 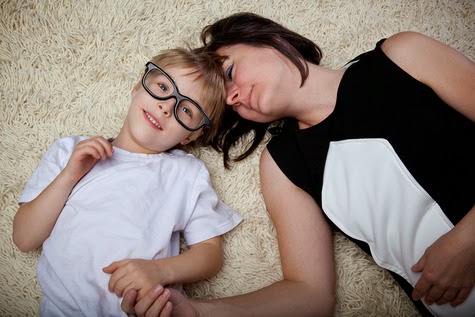 I tried to copy the dress that Julianne Moore wore in A Single Man, and did a fairly good job for a beginner, I must say!  I got some good feedback and a few blog readers, which encouraged me to continue.

(It's so funny to look at this photo now, 4 years later, and remember the circumstances:  my cousin and his friends are commercial photographers and had just rented a studio, so I popped in to get them to take a few free photos for me - as one does with family.  We had bought this shag rug from Ikea to mimic the set from the film, and it kept getting fur all over the dress, so one of the people assisting kept lint-rollering me.  My 5 year old son and 1 year old daughter were running around in the background, and I was terrified that they would break something expensive.  The spotlights were blinding me, and all their assistants were staring at me……and I just froze.  I couldn't think of how to pose!  And the photographer kept trying to encourage me to move a bit, but I felt like a rusty robot!  My face in most of the photos was bright red and my eyes were closed, but luckily he managed to get a few good ones.)

2.  How does my blog differ from others in its genre?

Does holding on to the same old blog design from 2010 make me different?  Does my infrequent posting make me stand out in a sea of active bloggers?

I think it's pretty obvious from the frequency of my posts and the outstandingly stellar graphic design of my blog that I'm not out to make money;  I'm not giving up my day job;  I'm not trying to attract a wide readership or increase my blog traffic.

Don't get me wrong: most of my favourite blogs that I started reading years ago have evolved into some kind of business, and that's part of the reason I still love them:  they are dynamic and give back and are evidence that a creative passion can become your profession!  However, I don't have the time, talent, or inclination to do that:  I'm just here in my little corner of the world, talking science and sewing.


3.  How does my writing process work?

Procrastination.  No, seriously.  I usually only make time to blog when I should be doing something else.  In fact, I should be writing an SOP for a new drug testing protocol now, but my mind is wandering, and I figure that blogging is a better way to distract my brain than looking at the latest photos of whatever celeb we are supposed to all think is important this week.

I promised myself that this year I would start tackling my alteration pile.  While participating in The Sew Weekly in 2011-2012 was great to get myself motivated and try new things, the weekly format meant that if something wasn't right on the first go, it got thrown in the alteration bin under my sewing table.  And they've been there since.  There are a lot of things that were just a tiny bit too big or small, and an afternoon of work would put them back in rotation, but it's hard to go back when new patterns tempt you, isn't it?


Case in point:  This Hollyburn skirt that I made in 2012 is now about 3 inches too big in the waist.  (In fact, now that I look at this photo, it's riding a little lower than I usually like, so I guess it was always a bit too big.)   It's a great basic skirt, and the fabric is a gorgeous brown and gold shweshwe from Gaborone, so I don't want it to languish in the bin any longer! 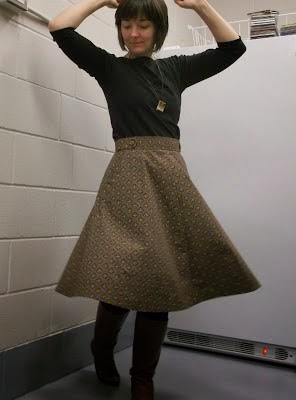 So I made myself a deal:  for every two UFOs or alterations, I could sew a new project.  So far I've stuck to it.  This also means that I don't have a lot of things to show or blog about this year, but it's certainly helping me get rid of the physical and mental clutter.

I'm going to break this chain letter and not nominate anyone, but please take a look at some of the blogs in my blogroll that you aren't familiar with, especially the CanCon!
Posted by Another Sewing Scientist at 15:42