I'm sure you know by now that I've been on strike.  We're into WEEK 7 of what I thought would be a quick couple of weeks of demonstration followed by a couple of conciliation meetings.  Nope.  There is no end in sight.  While the lab is struggling to keep up with the screening program, I'm spinning my wheels at home.  Well, I was, but it turns out that after 6 weeks at home, you kind of fall into a new routine.  Get up at 6:30, get the big one ready for school, get the little one up, drive the big one to maternelle, go back home, get the little one ready for daycare, walk her to daycare....then the rest of the day is mine.  I tackled a big pile of paperwork I'd been avoiding, did some fall-cleaning and organized all the kids' clothes in storage.  I've already gone through a 25lb. bag of flour (and put on a couple of pounds!), so I think I should lay off the baking, but there is still a lot of organizing and purging that needs to be done around here.  Case in point:  my sewing corner.  I can't believe I'm posting photos of this, but here we go.... 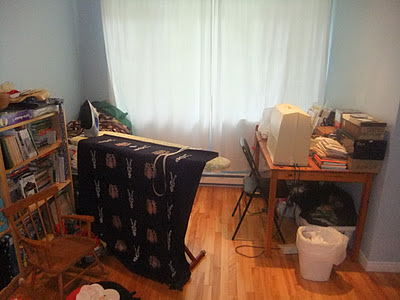 I have basically commandeered one end of the TV/playroom/living room. 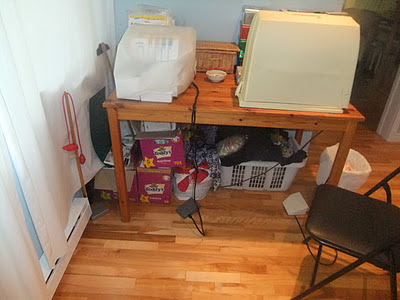 This is an old table that we used to use in the kitchen of our old rental places, but with a nice large house, we have upgraded.  Well, we now use two of these, properly varnished.  We can push them together in various configurations depending on how many guests we have.  Anyway, back to the sewing corner: 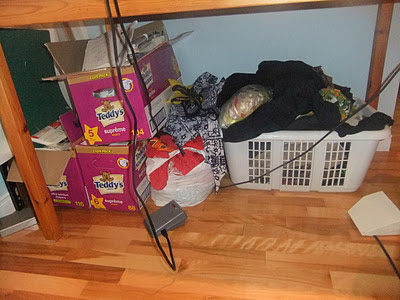 Eep.  Under the table are three diaper boxes bursting with patterns.  Not the best storage method, but I was making due.  In the centre is a bag with scraps, and to the right is a laundry basket full of things that need mending and alterations.  Ahem.  I'm sure we all have a pile of these. 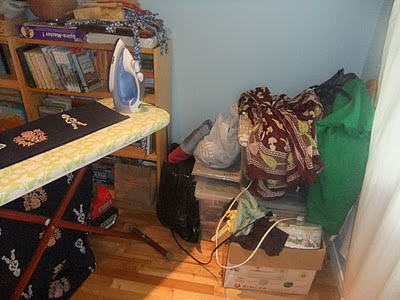 Looking in the other direction, here is my stash of fabric.  I thought that putting them in two see-through storage containers was the height of organization.....until I needed something in the bottom one and was too lazy to lift up the heavy box on top and put it back, so just threw it in the corner.  Again, we're all friends here and have nothing to hide....

I realized that this gradually evolved because I started sewing bit by bit and didn't really plan a space.  I just took stuff up from the basement pile as needed until I had an embarassing nest in a very public part of the house.  Time to attack. 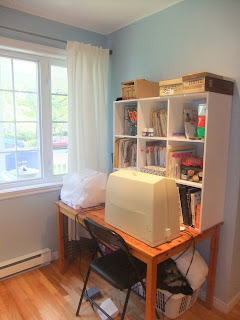 One 9-cube shelving unit courtesy of Ms. Martha Stewart.  I had planned to install shelves on that wall, but some investigation revealed that there are no wooden studs.  This was the best solution I came up with. 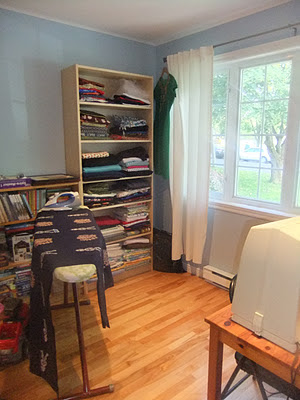 One Billy bookcase from Ikea. 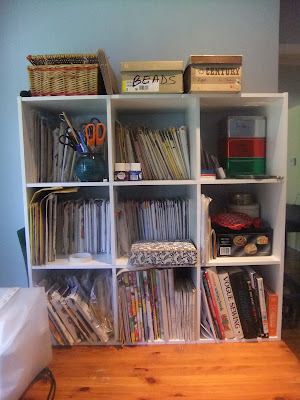 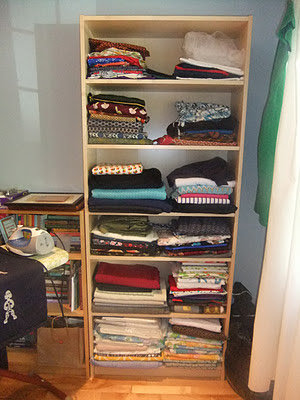 I even had time to organize the fabric appropriately, from the bottom up:  cotton sheets and muslin on the bottom where I won't care if the kids and/or cats get at them; broadcloth and cotton blends; silks and silky synthetics out of snagging reach of little fingers and claws; jerseys; exotic fabrics I bought around the world and don't want anyone to touch; and finally scraps and small bits on top.  (I know that you're not supposed to keep small pieces because they just become hoarded scaps, but these are really good ones.  No, really.)  I still have one garbage bag full of fabric shoved in the corner, but I have a very good explanation for that.  I bought a bag of wool suiting at an estate sale, but the woman had been a heavy smoker.  The fabric was stinking up all the other fabric, and so until I get around to laundering everything by hand, it is sealed for safety.  Maybe if this strike lingers on, I'll get it all freshened up and it can live with its buddies in the shelf of textile lust.
Posted by Another Sewing Scientist at 12:32

Email ThisBlogThis!Share to TwitterShare to FacebookShare to Pinterest
Labels: what i'm working on