Cape Town to Canada: The Skirt of Indecision and Disagreement

So the Thanksgiving weekend is over, the living room is shoveled out, the leftovers are eaten and the kitchen is degreased.  Seriously degreased.  You would not believe what percentage of a duck is pure fat.  In case you don't believe me, here's a picture of what was left over, and that's after we used loads of it to roast the pumpkin and poured some extra over the dressing that was a bit dry: 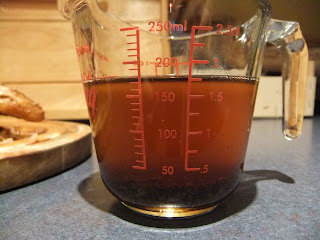 Anyway, I finally had time to do some sewing yesterday and the skirt of indecision and disagreement is complete.  It was a very straightforward pattern and it went together very easily.  It would have been one of those elusive 1-hour patterns if I hadn't run out of serger thread and then rethreaded it incorrectly and send broken needle bits flying.  Why is threading a serger such a pain in the ass?  I have actually zig-zagged seams rather than serging because the machine was threaded in the wrong colour and I didn't want to rethread. Eeep. 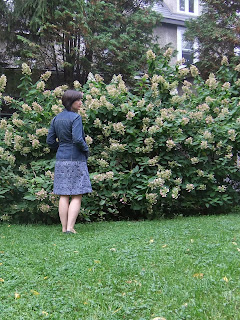 I carefully read all the comments, weighed everyone's opinion, and then decided to ignore the majority ;)  Since I had spent so much time trying to match the print, I had to go with matching panels rather than constrasting ones.

What I like about this fabric is that from a distance, it reads as a light denim.  Then you get close and see the intricacy of the print.  I'm glad I decided to use such a simple pattern because it lets the print speak for itself rather than getting lost in complicated construction lines.

And now for a close up of my fairly amateur* pattern matching: 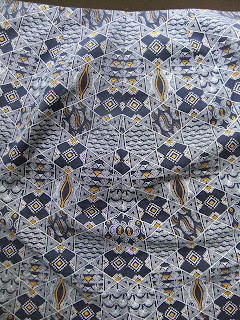 Not perfect, but I'll take it.  I didn't line it because shwe shwe is quite stiff and won't cling to tights (I tested it out), but on the other hand is soft against the skin and doesn't need a silky lining to feel good against bare legs.  Win-win. 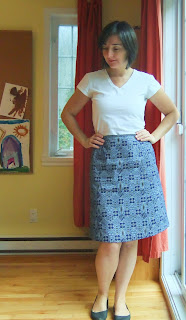 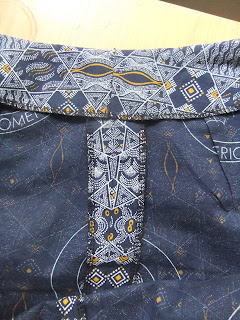 There was a seam down the centre back and I decided to add an alteration seam.  Actually, I have no idea what to call this, but you know how men's trousers have one long seam all the way up the backside and through the waistband?  That's what I did here instead of the usual solid waistband.  Since my waist size has fluctuated up and down by several inches in the past few years, I wanted to leave myself the option to take it in (or you never know, let it out).  And while we're talking about it, why don't women's trousers have this seam too, since, let's face it, we're more likely to need alterations than men are.  Men usually only need to let out gradually over the years, whereas women grow and shrink and grow and shrink!

*I had to google the spelling of amateur because I kept spelling it in a frenchy kind of way (amateure) and couldn't remember the correct spelling.  Don't ever google the term "amature", by the way.  You'd be suprised what sites come up.  Or maybe you won't be suprised.  That's your business.

Posted by Another Sewing Scientist at 16:49

Email ThisBlogThis!Share to TwitterShare to FacebookShare to Pinterest
Labels: cape town to canada