I tried to do the Sew Weekly Challenge of two weeks ago (American Apparel), and again last week (Album Cover Inspiration) but I didn't get around to it.  First there was kid fever and vomiting; then there was a multi-departmental grant to be submitted, which meant lots of overtime and lack of sleep; then there was me getting sick because of said vomit and sleep deprivation.  You know how it goes.
I did start a self-drafted knit dress like the one Karen Lynn Gorney wore in SNF: 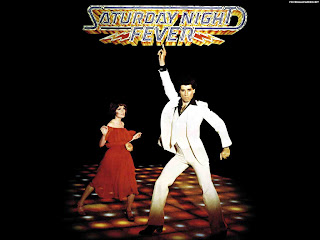 but something went wrong with the neckline.  It was too loose and droopy, even after unpicking and altering twice.  Unpicking serging is seriously no fun.  It's gone into the magic alteration pile, where it is sure to remain until the alteration elves get around to it.
I have a few things cut out, but nothing I really felt like working on during a heat wave.  Then my little guy tried on his beloved dashiki and complained that it was getting too tight, and he really needs something loose and cool to wear while the temperature is above 35.  Ah ha!
Easy to whip up in an hour or so, including tracing the shape, cutting, sewing and seam finishing.  And he actually wants to wear it, as opposed to little miss picky, who still hasn't worn her pillowcase dress. 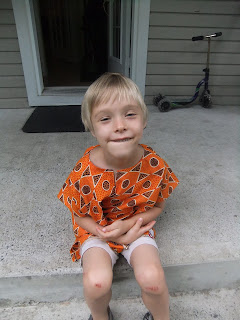 I used the 70cm end-of-roll giraffe-y wax print that I picked up in Cape Town for about $2.  It was just enough for the shirt, the facings and there is a little scrap left over that I could just about squeeze two tiny pockets out of, if I were so inclined.  I added size vents and left the selvages as bottom hem, partly out of sheer laziness and partly because I liked the writing on it: 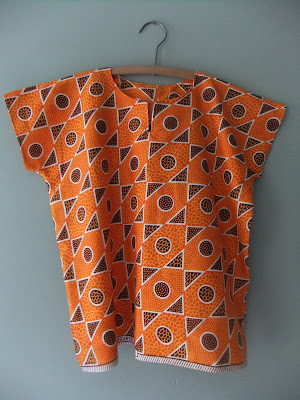 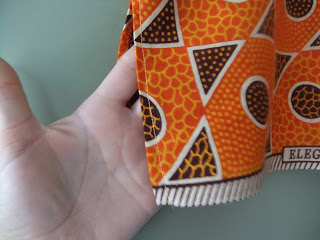 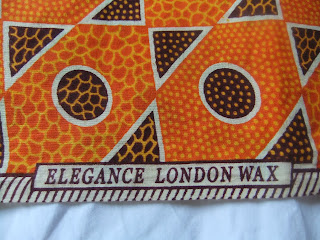 The bottom of the front slit doesn't lie quite as smoothly as I'd like because I was trying to copy the way it looked on the original, rather than sewing and slashing to a point.  Lesson learned. 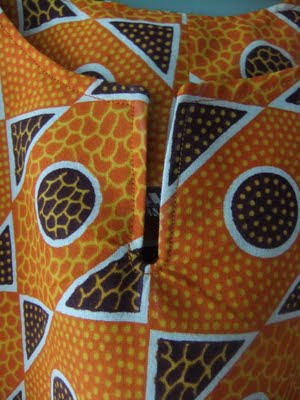 So let's just say, for the sake of argument, that my inspiration was Miriam Makeba; then I can add the photos to the Sew Weekly archive and feel like I've completed a challenge for the first time in a few weeks ;) 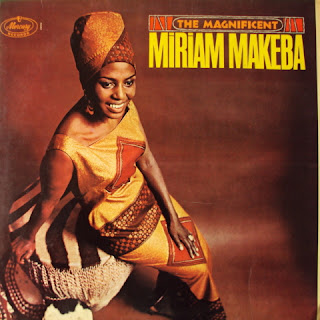 And then I have an excuse to watch a bunch of videos on Youtube until I can find the perfect one:
If you're not shakin' it by the end of Pata Pata, there's just something wrong with you.
Seriously, you should have that checked out.
Posted by Another Sewing Scientist at 09:56