Are we too nice to each other?

I've been thinking about this for a while, but wasn't sure it would be a good topic to bring up.  Then I realized that I'm probably not the only one who has thought about this, and it may provoke some interesting discussion.

When I discovered the online sewing community back in 2009, I was so happy to find a supportive group that shared freely and encouraged each other; it was a breath of fresh air compared to most online groups that seem to spend much of their time cutting down other members, calling them gay, and then eventually turning every conversation into a political insult fest, culminating in comparing each other to Hitler.  No matter what I seemed to post on Burdastyle, or later on this blog, there was always someone who would step up and compliment the project.  It was a great pat on the back when I decided to start sewing again after a 10-year hiatus.  I had a toddler and a new baby, and was pretty sleep deprived, so I readily admit that things were a bit wonky for a while.  OK, they are still wonky sometimes, but it was good to know that other people who knew what they were talking about were telling me I wasn't doing a shitty job.

After a year or so of sewing and blog reading, I started to notice something:  people are really hesitant to criticize each other's work, even when there is a glaring problem.  Really hesitant.  Sometimes there is a fitting problem that a simple tip could help solve.  Sometimes it's apparent that someone has overestimated their size and would look so much better just by sewing a size down.  Sometimes the design lines are lost in a busy print and a solid fabric would work much better. 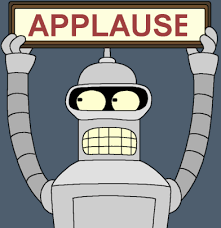 But I rarely see this kind of comment.  Maybe once or twice I've seen a comment that points out a problem, and it is usually phrased very obliquely ("maybe you could try ABC, but I love it just the way it is").  I once saw a comment on a dress that Gertie had made, saying something to the effect of "that neckline gapes a little; maybe you should pinch some fullness out there", and it was followed by a flurry of comments saying how nothing was wrong, and the dress was perfect.

Why are we afraid to critique each other's work?  Is it because the online sewing community is almost 100% female?  And we're taught that if you can't say something nice, don't say anything at all?  Are we really so sensitive that we can't take a little constructive criticism?  I would never want to hear, "Wow, that looks like crap on you!", but I would hope that if something was obviously not working with one of my projects, someone would pipe up and tell me how to fix it.

So, what do you think?
Posted by Another Sewing Scientist at 22:17