I'm back!  Two days of travel to get to Botswana from Montreal + three days of work +  ten days o' vacation in Gaborone and Cape Town + two days of travel back home =  tired but happy sewintist.

There was time for some fabric shopping (while my men when off to wait in a bar).  Since I had a hell of a time trying to get some information about the best places to shop for fabric in Gaborone and came up totally blank, I'll post what I managed to find, in case any of you happen to find yourself in Gaborone with a free afternoon: 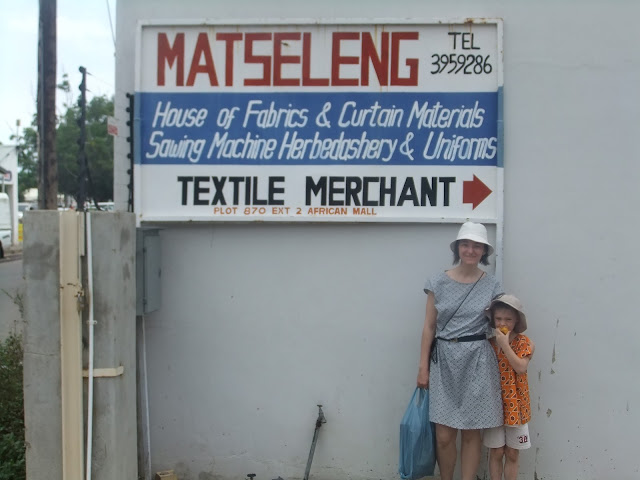 The first shop we visited, and one of the best:  Matseleng Fabrics (and "Sawing Machines and Herbedashery") on the south-east corner of the African Mall, behind the building that houses the Nando's and the National Bank.  Their selection of shwe shwe was quite impressive.  Aside from the traditional blue, brown and red, they had some newer fashion colourways: violet, green, pink...even orange.  Or is that tangerine tango? 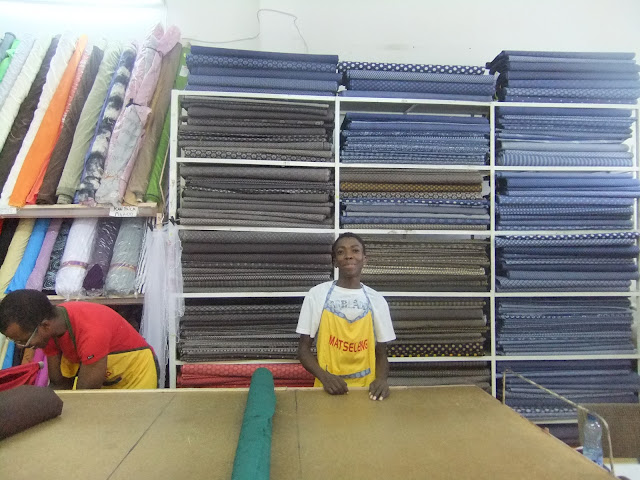 The young man on the left (Bruce) was too shy to have his photo taken, but he was a great help.  We started chatting about the fabrics, and it turns out he is studying fashion design and helped me pick some prints, estimate yardage needed, match zips, etc.  They had some vintage Singers (including a few hand crank models) for sale, but he quietly lamented the prices.  They were all refurbished and working well, but 999 Pula (about $135) is a bit steep around here.


Next up:  Timba Trading, on the west side of the African Mall.  This was another Indian owned shop, not as friendly as Matseleng, but with an even larger selection of shwe shwe, and a wider variety of cottons, rayons and synthetics. 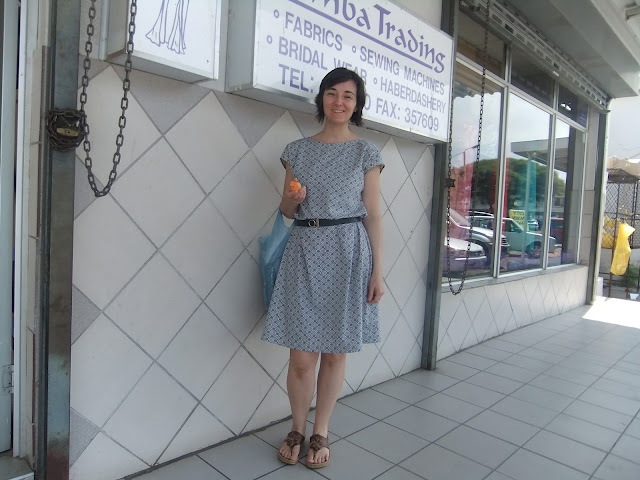 They didn't really like me taking photos, so I did it surreptitiously.   (And blurrily, apparently.)  You can also see some kangas hanging from the ceiling; they were about 35-40P if I remember correctly. 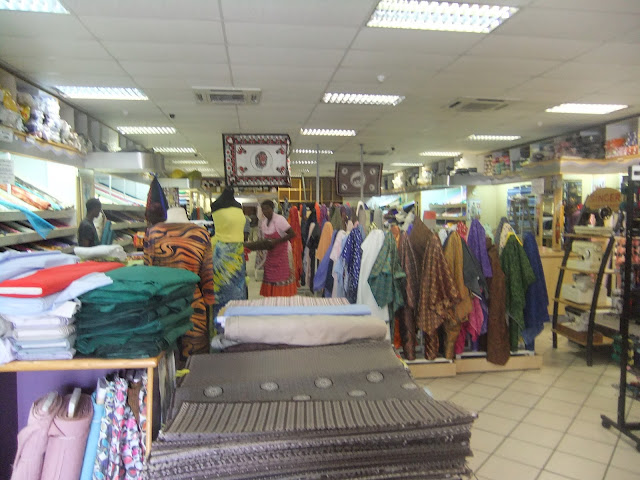 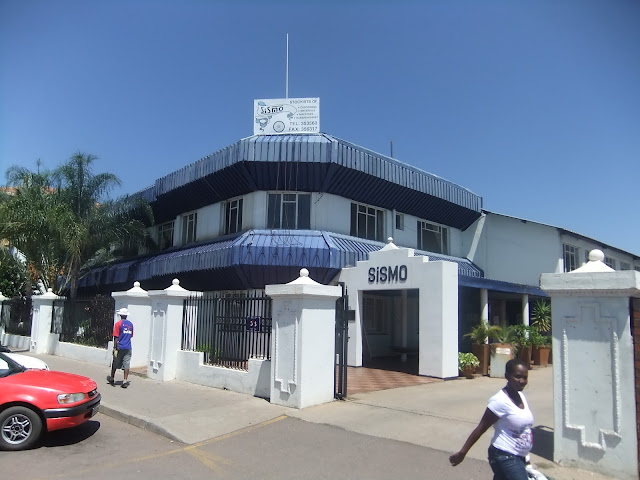 On another day, we had a vehicle and I managed to find Sismo, which is on the corner of Nelson Mandela and Independence Boulevards.  They were crowded, but I can't say I was really impressed.  The store was huge, but the selection wasn't much better than I had found at the African Mall shops.  And boy, were they unfriendly.  They should have just had a huge sign that said, "Buy something quickly or get the hell out of our store".  Sheesh. 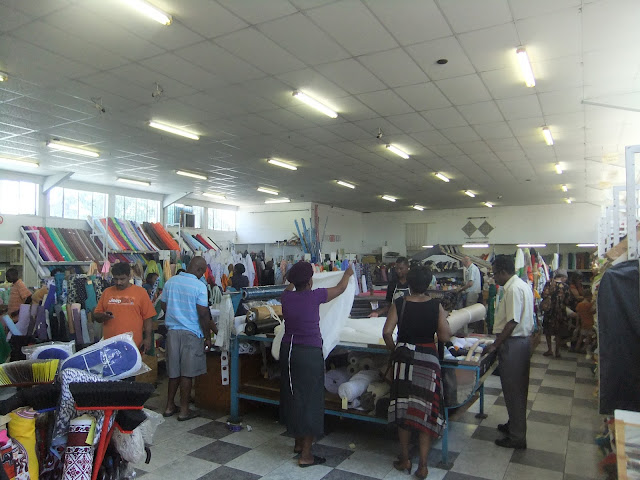 I guess this is the go-to shop for household fabrics and curtains though, if you judge by the number of expats buying dull beige curtain panels in the back. 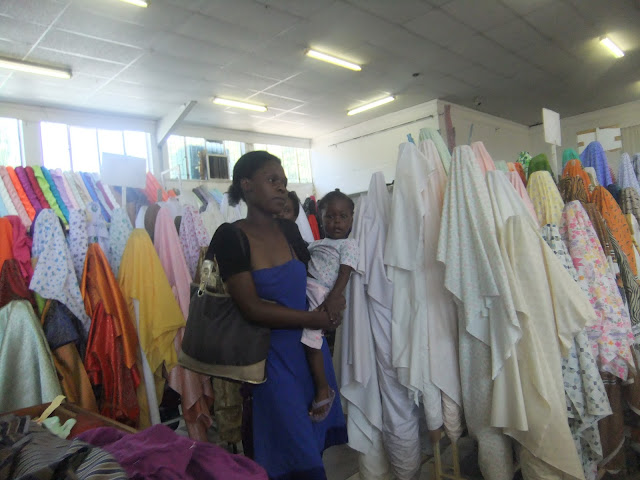 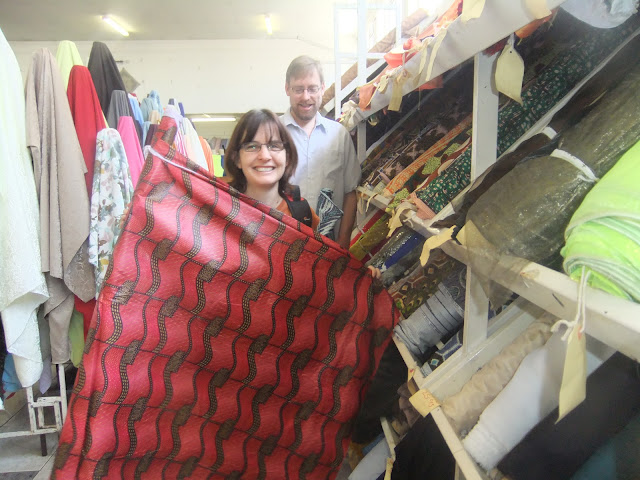 A few interesting wax prints, but the prices weren't any better than I can get back home on rue St. Hubert, to be frank.  (That's a colleague of mine, by the way, but she didn't end up buying anything either).  Next door was Fabric Paradise, but it seemed a bit empty when we visited.  I'm not sure what their usual selection is, but it may be worth visiting at another time.

So here's the haul: 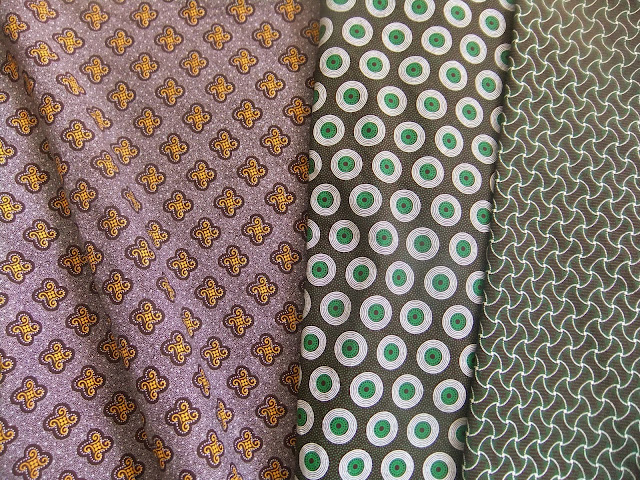 Traditonal shwe shwe, all at 47P/meter (~$7/m):  3m of brown/yellow, 2m of green/ brown circles and 1m of green/brown  polygons (what would you call those shapes?).  I plan to use the green/brown fabrics together, with the polygon print as contrast for pockets, cuffs or skirt panels.  I've seen a lot of shwe shwe used in this way (alternating skirt panels especially), so I think I'll be able to pull it off. 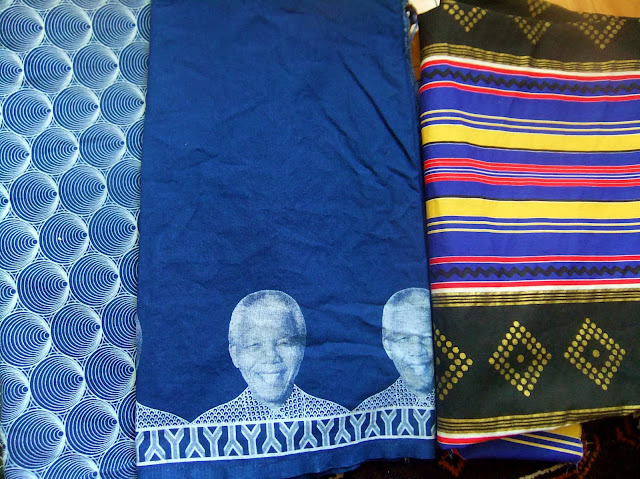 2m of a modern pop-arty shwe shwe, 1m of the Madiba border print (all they had left in stock - boo!  After washing shrinkage, 1m isn't quite enough to go around my hips...what to do?!), and 0.8m of this somewhat garish Venda print that my son had to have.  Not quite sure what that will become, but he was quite adamant that he needed it.

I also had a moment of weakness and picked up some non-traditional fabrics as well: 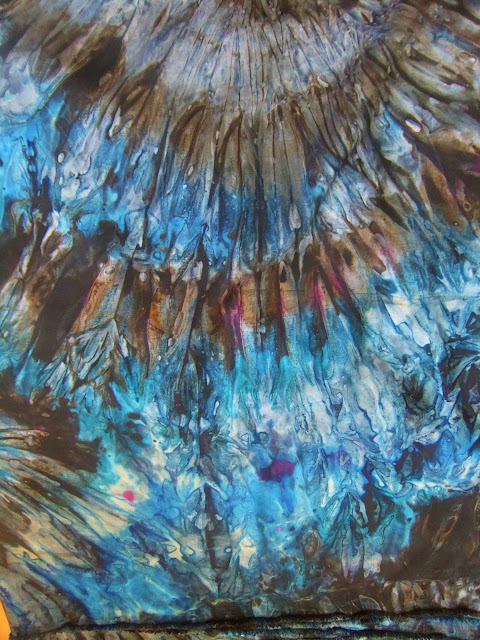 2.5m of tie-dyed rayon. I have a hard time finding rayons in Montreal, and this will make a good summer maxi dress. 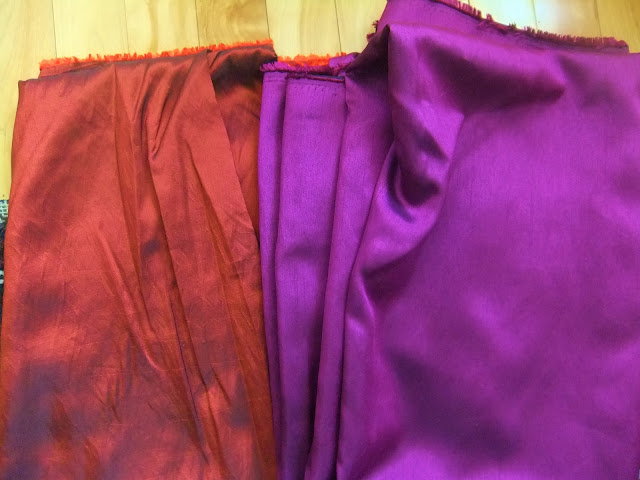 3m of synthetic blends.  They don't have the nicest feel on the skin, but the colours are amazing.  And hard to capture on camera.  The burnt orange is a shot fabric, so it varies between dark brown and bright orange depending on the angle of  light, while the purple is shot with black.  Much nicer than they look here, believe it or not.  (Again, I have to get a better camera....)

After leaving Botswana, we flew home via Cape Town so we could spend a few days in one of my favourite cities in the world.  Seriously, can somebody offer me a job here for a year or two?  I didn't do any fabric shopping in Cape Town because as it turns out, I have to go back in a few weeks to clear up some problems with the screening program there.  (We half considered changing my return ticket so I could just stay there and do the work, but I had to get home to take care of some of my own research.  And see my daughter who was having a hard time being parentless for two weeks and started biting everyone around her.  Toddlers certainly know how to express their emotions, don't they?)

Good to be back and have a long hot shower, but I don't think I'll have any sewing time before I leave town.  I did take a lot of me-made things along on this trip, and wore them more than anything else.  It's great to reach that stage of sewing where everything works, isn't it?

Posted by Another Sewing Scientist at 14:43

Email ThisBlogThis!Share to TwitterShare to FacebookShare to Pinterest
Labels: cape town to canada