The "Sick as a Leopard" Skirt


(As usual, I'm cutting and pasting straight from The Sew Weekly because I'm just that thrifty with my time.  Yes, thrifty.) 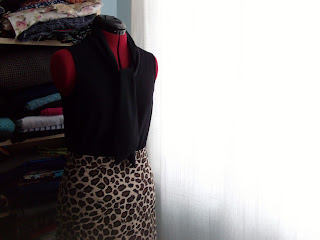 
I’m letting my dress form stand in for me this week because I’m sick and not willing to take off my jammies.  As for the title of this post, I was going to say “sick as a dog”, but having lived with dogs before, I’ve never seen one look particularly sick…….so leopard it is. 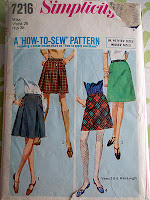 I’ve been pinning a lot of leopard prints lately, but what actually inspired me this week was a skirt worn by a toddler at my daughter’s daycare.  Not being the type to snap candid photos of someone else’s child and post them on the internet, you’ll have to make due with my Pintrest photos.  My only hesitancy about making a leopard print skirt was the fact that I live in Montreal, and once Quebecoise women reach “a certain age”, they tend to do three things:  dye their hair a garish shade of red, wear ill-fitting white capri jeans with cheap high heeled sandals, and most importantly, wear WAY TOO MUCH animal print.  Usually it is a cheap synthetic with lots of stretch and added sequins.  And worn too small.  *shudder* 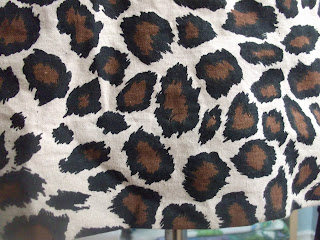 To avoid this fashion travesty, I chose a 100% cotton fabric and made an A-line skirt, rather than going with a tight pencil skirt or a super short miniskirt.  Here’s a wide shot, the way I would have worn it to take photos today.  I used a vintage zipper that I got in a big mixed bag at a thrift store for a few dollars, and luckily it matches quite well.  (The other zips are quite interesting: heavy metal ones, funky ones with ring pulls, invisible ones…….every colour of the rainbow.  I’m waiting for a zipper challenge to use some of them in different ways.) 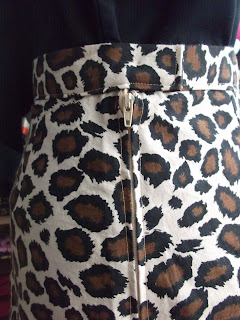 The zip looks a bit sloppy, now that I see it up here, but I won’t nitpick.  I slip-stitched the hem to make the stitches invisible.  This is a great simple pattern that I’ve used before, but somehow I ended up making a measuring mistake this time around:  because the waist measurement is 10cm too small for me, I usually just add the needed width to the centre front and back seam when I cut the fabric, but somehow this time I added twice the needed width, which meant I had to pick out one set of darts, reset them and then correct the side seam.  That added an extra hour to the time; hopefully I’ll remember correctly the next time I use this pattern!  I blame it on constantly switching between metric and imperial measurements when I’m sewing.  Why can’t everything be standardized?!? (and by standardized, I mean metric  :P) 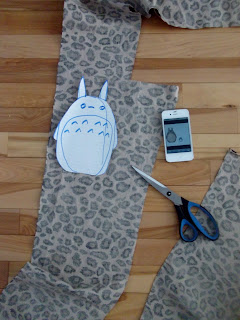 And the good thing about being a scrap saver?  We can use the leftovers for yayas (our family vernacular for stuffed animals.  It’s a long story, but basically my son started it and now the whole extended family calls stuffed animals “yayas”.) 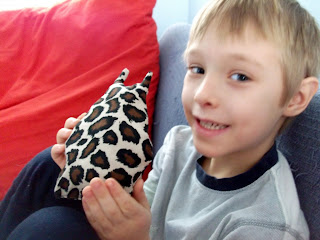 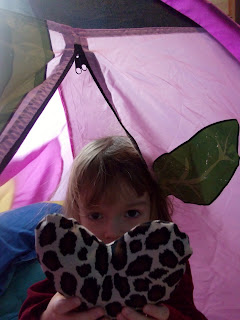 A Totoro was requested, so I drew a sketch that would fit the scraps, then sewed around the sides with a 1.5mm stitch and a 5mm seam allowance.  My son cut up some foam into small chunks for stuffing, and my daughter had to get in on the action and ask for a yaya too.  Luckily, she wanted a much easier shape ;)

Posted by Another Sewing Scientist at 00:03