I've been following along with the new Sew Weekly, but I've been forgetting to post here as well!  Without any further ado, here was week 3: 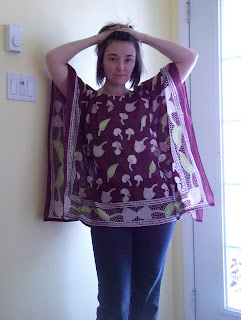 
NOTE:  I know Mena suggested we get outside and liven up our photos,but this is what my outside looks like these days.  (Poor little Moe doesn’t know what to do with herself.)


Rather than stand outside in the -20C wind, up to my ankles in snow, I resorted to this awkward photo of me in my front entrance.  My classic “in front of the bookshelf” shot will have to wait until we’ve taken down our Christmas tree, which is blocking the meager winter light from filtering into our house.

I’ve had this double kanga in my stash for about a year, and was holding out for the right idea before cutting.  Then BAM. I saw this------------>
(Image ripped straight from Kazz’s blog, but I think she’s a bit more reasonable that SOPA and won’t prosecute.)

I’ve been an admirer of Kazz and her self drafted style since she showed up here last year.  Although I could never reach her heights of awesome, I thought that at least I could make a Kazz inspired piece.
I cut the two kanga panels apart, and not wanting to waste the extra one to make bias tape, I just used a scrap of beige tape I had lying around.  The bottom edges needed hemming, and then it was a quick zip-zip up the sides and I was done.  Oh wait, this was a button challenge, wasn’t it?  Do button holes count?  My trusty Husqy has a one-step button hole option, so that took me all of about 2 minutes to add one to each side of my waist and thread a ribbon through.

I have absolutely no idea what this says.  Kangas usually sport traditional sayings, but still, you never know.  I hope it isn’t something offensive like, “All praise Steven Harper”.

Here’s cat #2 (Lou) modelling with me because she had her claws tangled in the front my my KKC (I had entitled this post “Kazztastic Kanga Kaftan”, but when I went to do that initialism, I realized what it said, and had some editing to do…..yikes).

And finally, one last outtake photo in my best Kazztastic pose. Or more accurately, “Vicki turning up the thermostat”: 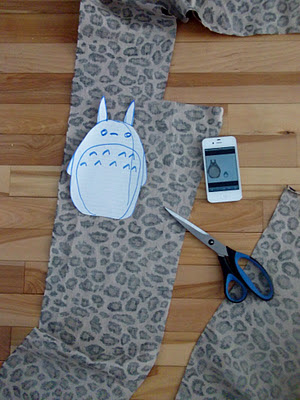 Posted by Another Sewing Scientist at 20:52