Ghost in The Sew Weekly Machine

So for whatever reason, The Sew Weekly has been giving me grief over the past few weeks.  Either my photos get rearranged or they just don't get posted.  Hopefully Mena will get everything sorted soon enough; it would be a shame to let things slide this late in the year, when so many people have participated all along.  I guess there's no harm in posting my most recent projects, since they are past due online anyway!

I made up this super hippie apron dress just because...well....I had the pattern and we were all sewing aprons.  Who knew it would be so unflattering?  I guess most people knew, since you don't see them anymore: 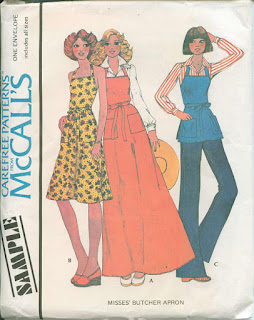 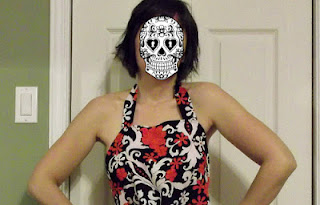 (I took this photo very late one night and I looked like shit warmed over, so to speak, hence the disguise.)  Very little shaping to the front bodice meant that it was as flat as an apron - and gaped open around the neckline and on the sides.  Not a very secure thing for this old mom to be wearing out in public.  That may have flown if I were a pert young thing back in the bra-less '70s, but I just can't imagine getting away with it now! 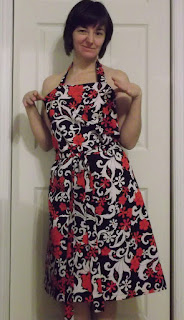 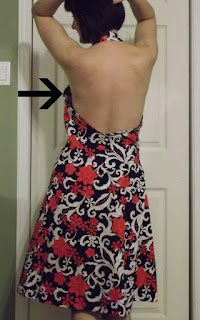 Fortunately, the pattern pieces took up so much yardage that there is plenty to recut into something less prone to public wardrobe malfunctions.  It'll be easy enough to convert to a wrap skirt in an hour or so.

I'm also working on a super top secret project that I won't be able to talk about until the end of the year.  Intrigued?  Here's the most I can reveal without getting into trouble with the big boss involved: 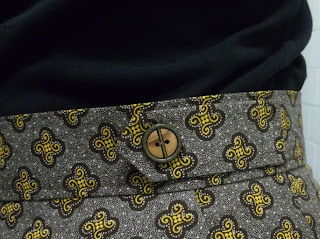 Posted by Another Sewing Scientist at 16:05