I picked up this 1967 How To Sew skirt pattern at either Village des Valeurs or my local charity shop, so I must have shelled out a whopping 25 cents or (gasp) 65, depending on the source.  Thanks to the glut of patterns available in thrift shops around here, I'm amassing quite a stash and I'm starting to lose track of where I got them.  I think I'm close to the tipping point where I will have to start unloading some.  Anyway, on to the skirt: 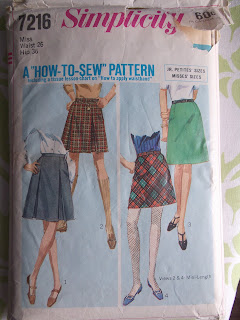 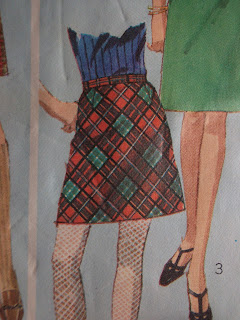 Cute, basic, reminiscent of my elementary school days, but a bit too small and not high on my list to make.  Then 6 months later, I found this 1m of polyester knit for 1$ and it seemed so strangely familiar that I had to buy it. 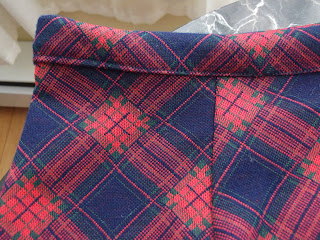 Since it is a knit, I didn't think I really had to put a zipper in as shown in the pattern; I just added the waist band and hoped for the best.  It pulls on alright, but after a whole day at work, it was getting a bit too saggy.  That will teach me to wing it without proper sewing experience.

Here are some photos taken this morning before dropping the little man off at daycare.  He wanted to get in on the action, but didn't want to hold the camera, so it's camera-balanced-on-the-stereo + timer to the rescue: 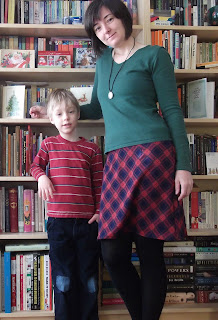 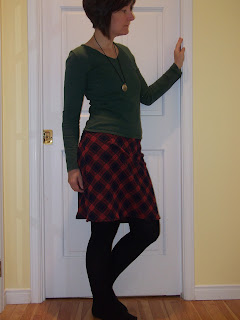 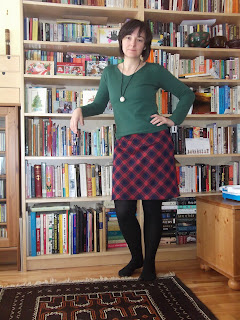 I guess this counts toward my Sewing Through the Decades goal, but I'm not terribly proud of the result.  In fact, I have so many beautiful '60s patterns that would look so much better than this.  I'm crossing off the 1960s for now, but may bring in a replacement later!

Email ThisBlogThis!Share to TwitterShare to FacebookShare to Pinterest
Labels: sewing through the decades