Back home, back to work, back to sewing

My family has logged almost 20,000km in flights over the past two weeks, so you'll forgive me if I've been silent in blogland.

I was in Vancouver, caring for my MIL when I heard that my strike had finally ended.  Perhaps it is my lack of religious upbringing, but it makes so much more sense to me to spend some time with someone at the end of their life, rather than waiting until they are gone and attending their funeral.  In trying to explain death to my son and nephew, we came to the conclusion that my final days should involve a party with my favourite band, a bouncy castle to jump in and a mountain of gummies to swim in (we're talking about a 6- and an 8-year-old here, but I am all over that idea.  I plan to hold them to it, although I doubt I'll be able to get Henry Rollins, Tom Waits and all the Wainwright / McGarrigle family together at the same time.  Unless I get a really awesome bouncy castle.)

I flew back to Montreal and now I have to remember how to do all that science stuff again.  The fact that my previous lab space has been taken from me and the renovations in my new space are not yet complete makes things awkward (long story, involving lots of passive aggression misdirected at me, rather than at the person responsible, but that's another story....)

With all this going on, there hasn't been much sewing happening around here, but I do have a little sneak peek for the week ahead: 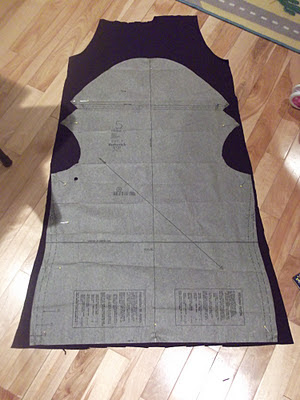 Posted by Another Sewing Scientist at 23:21